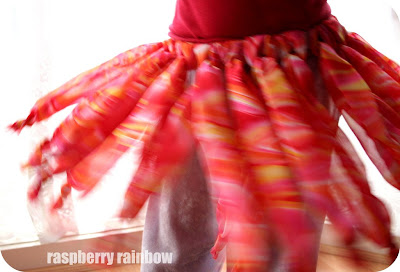 Last Sunday Abbey had her gymnastics display (like a concert) Their routine was to a song from Finding Nemo, so the costume brief was under the sea theme. We were told not to go to any trouble, just dress them in blue as it is a sea colour. My pink obsessed Abbey has very little blue, or green, in her wardrobe, apart from some jeans, which are completely inappropriate attire for 4 year old gymnastic displays. 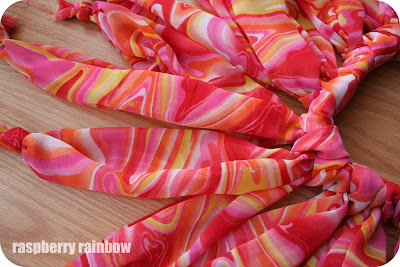 So a costume of some sort had to be made. One she could easily move around in, do forward rolls (somersaults) and climb in. Luckily, GJ's had another one for their amazing 25% off sales recently that I just HAD to check out, and I found this fabric - it looked just like Nemo to us. I bought 1.5 metres of it, and took it home where it sat around gathering dust.

Chris had some how put the idea in Abbey's head she should go as a jelly fish. I had no idea how to turn 1.5 metres of fabric into a jelly fish costume, a costume she could move around in easily. So it is 8pm the night before her gymnastic display, and I finally know what to do.

I roughly cut the fabric along the long length, every 15cm or so (no measuring) overlock the long edges together of each fabric strip, making these tubular jelly fish tentacles. Cut them in half. Chris turns them all the right way around. I can't be bothered to finish off all the ends, so tie knots in them - which look great, in my opinion anyway. Knot them over a circular piece of elastic (perfect length for Abbey) and voila, done.

One jelly fish skirt. Made in 30 minutes (seriously!) 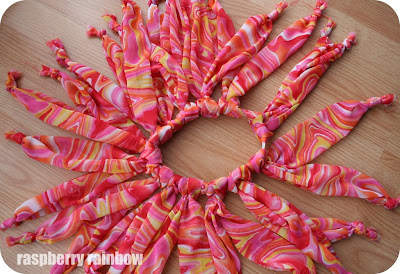 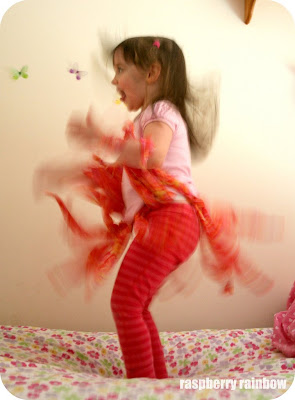 Posted by Cat from Raspberry Rainbow at 9:32 PM

Email ThisBlogThis!Share to TwitterShare to FacebookShare to Pinterest
Labels: 2010, December, gym, I made this, jelly fish, skirt